This book of previously unpublished work, collected nearly thirty years ago is a tribute, to the art of tattoo, to tradition, to family and to love. * DISPATCH DATE 21st FEBRUARY 2023 *

Berber Tattooing: In Morocco’s Middle Atlas
Felix & Loretta Leu
Edited & Illustrated by Aia Leu
Berber Tattooing is a unique and tender record of the tribal skin art of Morocco’s Middle Atlas. The result of a series of chance encounters, Felix & Loretta’s Leu’s road trip in 1988, opened a doorway into the intimate world of the women of the Berber tribes. In this book, the women tell their individual stories, revealing the traditions of the tattoo in their culture, together with insights into the lives that they led.
Sensitively captured in drawings from the time, by Aia Leu, the faces of the Berber women speak of a tribal culture that was fast disappearing, even then. As tattoo artists themselves, Felix and Loretta were able to find a common ground with the Berber families, gaining unprecedented access into this sparsely documented Berber art form.
This book of previously unpublished work, collected nearly thirty years ago is a tribute, to the art of tattoo, to tradition, to family and to love.

Authors
Felix & Loretta Leu, both born in 1945, were artists, “freaks”, and adventurers. From 1965, when they met in New York City, until 1978, they travelled and lived in America, Europe, North Africa, India and Nepal, and in time were accompanied by four children, who were all born “on the road”. In 1978 they discovered tattooing as an art form, one with which they could support their family anywhere in the world. In 1981 they chose to settle in Switzerland where they created “The Leu Family’s Family Iron Tattoo Studio”. Felix died of cancer in 2002. Loretta, lives in Switzerland, walks in fields and forests with her two dogs, and is writing a history of her life with Felix.

Artist
Aia Leu works from her studio, she moved to Kenmare in Ireland in 1989 and lives near the town in the mountains. The daughter of Felix and Loretta Leu she was born in 1971, she studied figure sketching in Vevey, Switzerland as a teenager. Her paternal grandmother is the Swiss artist Eva Aeppli.

Aia’s work draws directly from her multicultural and bohemian upbringing. Her work is particularly influenced by both her years spent as a child in India, and the richness of the Irish landscape. Her work is in private collections worldwide, she has had solo shows and contributed to group shows internationally. Her work was on exhibit in the ‘Leu Family Art’ at the Museum Tinguely Basel in Switzerland in 2021. Paintings currently for sale by Aia Leu can be viewed here.

Only logged in customers who have purchased this product may leave a review. 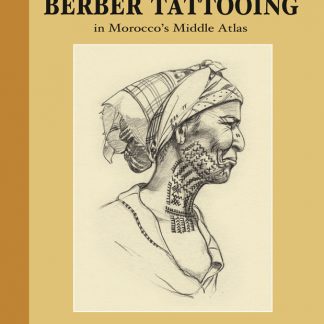 You're viewing: Berber Tattooing (pre-order) €42.00
Rated 5.00 out of 5
Add to basket
Join Waitlist We will inform you when the product arrives in stock. Please leave your email address below.

By continuing to use the site, you agree to the use of cookies. more information