Felix Leu: Tattooing Ask Here is a vivid collection of original and traditional flash, lively interviews, personal stories and photographs that detail the tattoo history of Felix Leu. An important pioneer of the Tattoo Renaissance which emerged in the 1970s, his artistic background and rich imagination led Felix to develop a very distinctive freehand tattoo style.
The early flash which Felix drew, both in Goa and Lausanne, was shaped primarily by his client’s requests. Hippie, biker and punk images, artwork inspired by record covers, science fiction and comic books, as well as tribal and oriental designs were all used in his tattoo work. He was also an early protagonist of using freehand bio-mechanical, psychedelia, pop-art and cartoon elements in tattoo, most famously the image of the soft twisted tattoo machine. His innovative approach to re-inventing both ancient and modern designs can now be seen as the forerunner of many contemporary tattoo styles.
Felix Leu’s tattoo legacy is carried on by the many young tattooists he inspired and helped along the way and notably by his son Filip Leu who has become one of today’s foremost tattoo artists.
Author
Born in 1945, Loretta Leu met Felix Leu in New York city in the mid- sixties. Both were artists and adventurers and from then until 1978, they travelled and lived in America, Europe, North Africa, India and Nepal, and in time were accompanied by their four children, who were all born “on the road”. In 1978 they discovered tattooing as an art form, one with which they could support their family anywhere in the world. In 1981 they chose to settle in Switzerland where they created “The Leu Family’s Family Iron Tattoo Studio”. Felix died of cancer in 2002. Loretta, lives in Switzerland, walks in fields and forests with her two dogs.

Only logged in customers who have purchased this product may leave a review. 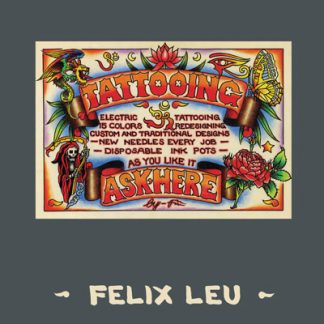 You're viewing: Felix Leu: Tattooing Ask Here €50.00
Rated 5.00 out of 5
Add to basket
Join Waitlist We will inform you when the product arrives in stock. Please leave your email address below.

By continuing to use the site, you agree to the use of cookies. more information